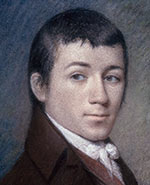 Born to intellectual Quaker parents in 1771 and trained as a lawyer, Brown was one of the most important literary innovators of his age. In addition to creating novels rich with psychological and philosophical complexity, he was one of the earliest authors of short stories. He also excelled in the genre of the essay, became the first American literary critic of note, introducing in his magazines extended reviews of new American publications, and developed provocative theories of historiography and fiction that point ahead to the 20th century. Of the post-revolutionary generation of writers, few— Noah Webster, Benjamin Rush, Philip Freneau, Judith Sargent Murray, William Dunlap, Joel Barlow, or Susanna Rowson—had the range of interests, the critical alertness, or the scientific acuity of Brown. His mind was molded in that last moment of the late Enlightenment when the desire to master the arts and the natural sciences was one, and knowledge was freely disseminated.

Our edition builds on, supplements, and contextualizes the Bicentennial Edition of The Novels and Related Works, published between 1977 and 1987 under the general editorship of Sydney J. Krause and S. W. Reid. Consisting of six volumes and containing the novels Wieland (1977), Arthur Mervyn (1980), Ormond (1983), Edgar Huntly (1984), Clara Howard and Jane Talbot (1986), and the dialogue Alcuin (1987), the Bicentennial Edition became a landmark in modern Brown scholarship. Paperback editions of individual novels based on the Kent State University Press texts have since been published for classroom use, and Sydney J. Krause edited a one-volume edition of three novels for the Library of America. This has done much to re-establish Brown as an important novelist in the American canon. The Bicentennial Edition, however, contains far less than half of Brown’s known writings. His non-novelistic fiction, letters, poems, essays, reviews, historical narratives, and political pamphlets all remained outside the scope of that edition. While most of the letters and some poems survive in manuscript form, most of this large body of non-novelistic writing was published in periodicals, notably the three magazines that Brown edited during his lifetime.

Equally as important, revisionist scholarship over the last 20 years—driven by the new historicism, interdisciplinary cultural studies, poststructuralism, postcolonial studies, gender, and queer theory, and other approaches—has also drawn our attention back to Brown. This upsurge in interest, which focuses attention on the postrevolutionary historical moment and the North Atlantic cultural and intellectual contexts of the 1790s, has begun to revise our notion of Brown as an intellectual and of the cultural milieu in which he wrote, recognizing him as a versatile encyclopedist, like Thomas Jefferson, who was widely read in English, German, and French literature and who engaged in many of the early republic's—and the period's—political, philosophical, and social controversies.

The Charles Brockden Brown Electronic Archive and Scholarly Edition aims to identify, transcribe, organize, and ultimately edit Brown's uncollected writings, making them searchable in an electronic environment. Access to these texts will cast new light on Brown as a novelist, editor, and historian, revise his stature among the intellectuals of the new republic, and enhance our understanding of authorship and the dynamics of print culture in his day.

Our project builds on the steady and now explosive growth of interest in Charles Brockden Brown in North American and European scholarship since World War II, which has securely established his reputation as the first important American novelist. As early as the 1950s and 1960s, such scholars as Harry Levin, Warner Berthoff, Leslie Fiedler, and Donald Ringe directed attention to his work, a trickle of dissertations and articles turned into a stream, and by the time ground-breaking monographs (Norman Grabo's The Coincidental Art of Charles Brockden Brown, 1981), collections (Bernard Rosenthal's Critical Essays on Charles Brockden Brown, 1981), and reference works (Patricia Parker's Charles Brockden Brown: A Reference Guide, 1980) appeared, Brown's place in the canon of the American novel, never in question in the 19th century, was re-affirmed for the 20th.

Two important dimensions of our present project—identifying the larger Brown canon and drawing attention to Brown's brilliant work beyond the novels—were already emerging in the1960s. Building on the work of Charles E. Bennett and Daniel Edwards Kennedy, Alfred Weber began todraw attention to some of Brown's uncollected works. Early publications in the 1960s and 1970s were followed by Weber's critical edition of Somnambulism and Other Stories (1987) and (co-edited with Wolfgang Schäfer, and with the collaboration of John Holmes) of Brown's Literary Essays and Reviews (1992). John Holmes, in collaboration with Edwin Saeger and Alfred Weber, has been gathering, attributing, and editing Brown's letters for publication since 1986. Our present project not only builds on, revises, and completes these efforts, but it also opens up a vast new horizon of additional writings known or suspected to be by Brown.