The volumes in this series all follow MLA-CSE guidelines for scholarly editions and receive additional vetting and certification from the CSE. They include Historical and Textual Essays, full textual apparatus, annotation, Appendices, and Indexes. The volumes will be available in print and electronic formats.

The print volumes we intend to produce are as follows: 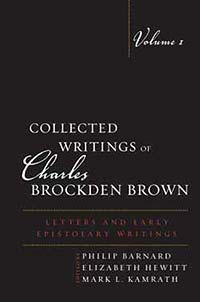 Letters and Early Epistolary Writings, volume 1 of the series, presents, for the first time, Brown’s complete extant correspondence along with three early epistolary fiction fragments. Brown’s 179 extant letters provide essential context for reading his other works, as well as a wealth of information about his life, family, associates, and the wider cultural life of the revolutionary period and early republic. The letters document the interactions of Brown’s intellectual and literary circles in Philadelphia and during his New York years, when his publishing career began in earnest. The correspondence also includes exchanges with such notables as Thomas Jefferson and Albert Gallatin. The three epistolary fragments are the earliest examples of Brown’s fiction and are transcribed here for the first time in complete and definitive texts.

The volume’s historical texts are fully annotated and accompanied by historical and textual essays, as well as other appended materials, including the most complete and accurate information available concerning Brown’s correspondents and family history. The scholarly work informing this volume establishes significant new findings concerning Brown, his family and friends, and the circumstances of his development as a major literary figure of the revolutionary Atlantic world.

"History and romance are terms that have never been very clearly distinguished from each other. Is should seem that one dealt in fiction, and the other in truth; that one is a picture of the probable and certain, and the other a tissue of untruths; that one describes what might have happened, and what has actually happened, and the other what never had existence.
These distinctions seem to be just; but we shall find ourselves somewhat perplexed, when we attempt to reduce them to practice, and to ascertain, by their assistance, to what class this or that performance belongs. . . .
If history relate what is true, its relations must be limited to what is known by the testimony of our senses. Its sphere, therefore, is extremely narrow. The facts to which we are immediate witnesses, are, indeed, numerous; but time and place merely connect them. Useful narratives must comprise facts linked together by some other circumstance. They must, commonly, consist of events, for a knowledge of which the narrator is indebted to the evidence of others. This evidence, though accompanied with different degrees of probability, can never give birth to certainty. How wide, then, if romance be the narrative of mere possibilities, is the empire of romance? This empire is absolute and undivided over the motives and tendencies of human actions."

from "The Difference Between History and Romance" (April 1800) 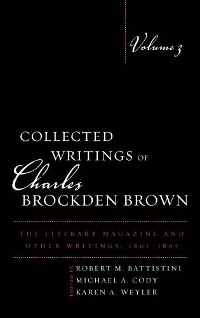 Charles Brockden Brown (1771 - 1810) was a key writer of the revolutionary era and early U.S. republic, known for his landmark novels and other writings in a variety of genres. The Collected Writings of Charles Brockden Brown presents all of Brown's non-novelistic writings - letters, political pamphlets, fictions, periodical writings, historical writings, and poety - in a seven-volume scholarly set. This series' volumes are edited to the highest scholarly standards and will bear the seal of the Modern Language Association Committee on Scholarly Editions (MLA-CSE).

The Literary Magazine and Other Writings, volume 3 of the series, presents a selection of Brown's published writings between 1801 and 1807. The majority of the volume is devoted to texts that appeared in The Literary Magazine, and American Register, which Brown edited from October 1803 to December 1807, through fifty-one issues. The volume also includes a number of additional non-fiction pieces that Brown wrote during this period: a significant review essay in the 1801 American Review, and Literary Journal; a series of articles in the 1802 Port Folio; and a biographical sketch of Brown's late brother-in-law, John Blair Linn, which was published with Linn's book-length poem Valerian in 1805. The majority of these texts have not been in print since the early nineteenth century, and never have they been accorded this level of textual and editorial scrutiny. 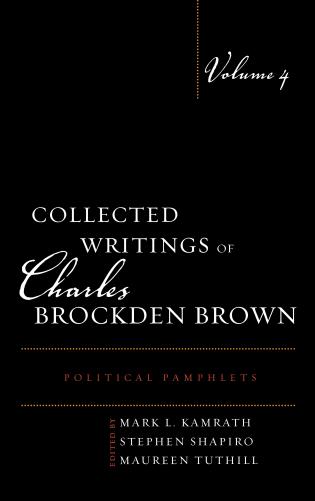 Charles Brockden Brown (1771 - 1810) was a key writer of the revolutionary era and early U.S. republic, known for his landmark novels and other writings in a variety of genres. The Collected Writings of Charles Brockden Brown presents all of Brown's non-novelistic writings - letters, political pamphlets, fictions, periodical writings, historical writings, and poety - in a seven-volume scholarly set. This series' volumes are edited to the highest scholarly standards and will bear the seal of the Modern Language Association Committee on Scholarly Editions (MLA-CSE).

Political Pamphlets, volume 4 of the series, brings together, for the first time, the three political pamphlets and related writings of Charles Brockden Brown. While Brown is well known as a novelist and editor, his pamphlets addressing the Louisiana Question and Jefferson's Embargo are here presented and contextualized in terms of the period's geopolitical developments and the newspaper polemics that were their immediate context. Each edited text provides detailed information concerning publication history, provenance, and attribution, along with extensive scholarly annotation. A Historical Essay locates the pamphlets in the wider contexts of Brown’s literary career, the print culture of the Revolutionary Atlantic world, and the literary history of the eighteenth and nineteenth centuries, while a Textual Essay provides full bibliographical information on the sources for all copy-texts, as well as extensive description of the editorial protocols. The volume substantially reshapes our understanding of Brown's corpus and development, and provides insights into the relations of literary, journalistic, and political writing during the Jefferson and Madison administrations. The Committee on Scholarly Editions of the Modern Language Association has awarded the volume a seal of certification as an MLA Approved Scholarly Edition.

"The crime of heresy was very vaguely defended by the laws. Any deviation from the prevailing faith and practice, in the Island, was stigmatized as such, and the judges of the Convicata (so this tribunal was afterwards called) were allowed to interpret these laws, according to their own judgment. The punishment in all cases was capital, and the sums of their proceeding, and the rules of evidence were left to their own discretion.
A tribunal of so tremendous a nature, so secret and absolute in its proceedings, bounded, in its jurisdiction, by such vague and indefinite limits, and wholly independent of the civil power, could owe its existence only to the ignorance, inexperience and supineness of the prince and his barons. The outrages of Hecta, had produced the belief that the most swift and energetic measures were absolutely necessary to guard against their recurrence, and as the Laics were sincerely attached to their own faith, they thought too much could not be done to preserve its purity inviolate. They were not aware of the abuses to which such an institution was liable, and how far the powers, entrusted to the judges, might be perverted to the gratification of their own resentments, the views of sanguinary faction, or the separate interest of the clergy. . . .
One is struck with astonishment at beholding so omniscient a scrutiny, so elaborate a system, constructed and directed to no other end than to detect and punish imaginary crimes, opinions relative to points trifling and ridiculous, or absurd and contradictory. What efficacy would a system like this possess, if directed against the genuine crimes by which human society is afflicted, if this potent engine had been turned against the innumerable curses of fraud and violence? How could they have hoped to escape detection and vengeance? Place a king at the head of such a tribunal, and make this implicated agency subservient to maintenance of public order, and of royal authority, what despotism can be imagined more absolute and irresistible."

from the Historical Sketches

"Though it requires no extensive research to discover instances of selfish and iniquitous policy in the history of all nations, and especially in British history, mankind seldom extend their view beyond the present scene, and the recent usurpations of the French in the free cities and small states of Germany, in Switzerland, and Italy*, excluded from the view of political observers the more ancient or distant examples of similar iniquities in the conduct of Great Britain. Even the recent conduct of that power in Turkey was as egregious an instance of political injustice as the imagination can conceive; but it was transacted at a distance, was aimed at infidels and the perpetual enemies of christian Europe, and was not crowned with success. The conduct, likewise, of the same government in India was a tissue of bare-faced usurpations on the rights of others, for which the usurper never deigned to allege any other motive than his own interest. But these were likewise afar off, and affected a race of men too much unlike ourselves to awaken our sympathy. . . .       [Aaron] Burr's designs might naturally enough, in this state of things, excite no uneasiness among the American settlers at New Orleans, but the guardians of the nation were bound to be very uneasy on this account, because the most flagrant mischiefs could not fail to follow a war entered into thus unjustly and wantonly with France and Spain. And for what end? To gratify the lust of plunder and adventure, in a few unsettled individuals, who have the insolent folly of clothing their lawless views, under the stale, bald, flagitious pretences of giving liberty and independence to those whom they murder or despoil." 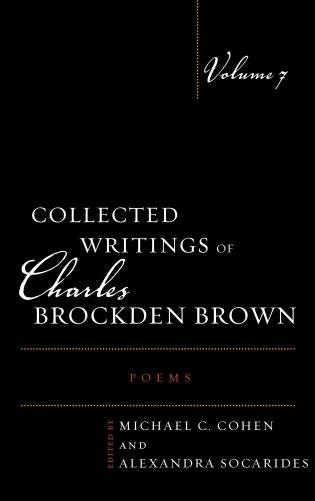 Charles Brockden Brown (1771–1810) was a key writer of the revolutionary era and early U.S. republic, known for his landmark novels and other writings in a variety of genres. The Collected Writings of Charles Brockden Brown presents all of Brown’s non-novelistic writings—letters, political pamphlets, fictions, periodical writings, historical writings, and poety—in a seven-volume scholarly set. This series’ volumes are edited to the highest scholarly standards and will bear the seal of the Modern Language Association Committee on Scholarly Editions (MLA-CSE).

Poems, volume 7 of the series, is the first comprehensive collection of the poetry of Charles Brockden Brown (1771– 1810), one of the earliest professional writers in U.S. history. While Brown is well known as a novelist, his poetry has never before been collected, and many of the works included in this book appear in print for the first time in 200 years. The Committee on Scholarly Editions of the Modern Language Association has awarded the volume a seal of certification as an MLA Approved Scholarly Edition. Each edited text has a detailed textual note providing publication history, provenance, and information on attribution, along with extensive scholarly annotations. A historical introduction locates the poems in Brown’s biography, the print culture of the Revolutionary Atlantic world, and the literary history of the seventeenth and eighteenth centuries, while a textual essay provides full bibliographical information on the sources for all copy-texts, as well as an extensive description of the editorial protocols. The volume therefore promises to reshape our understanding of professional literary writing in the period after the American Revolution.